The Map of My Dead Pilots

“Strap yourselves in. Map of My Dead Pilots is one hell of a ride, one of the best Alaska books ever. In gorgeous, literary prose that nails the rhythms of a barroom conversation and plumbs the depth of the human soul, Colleen Mondor writes a one-way ticket into the world of Alaska aviation. If Shakespeare and Hemingway teamed up to write an Alaska reality show, it might go something like this.”
—Nick Jans, author of The Last Light Breaking and The Grizzly Maze 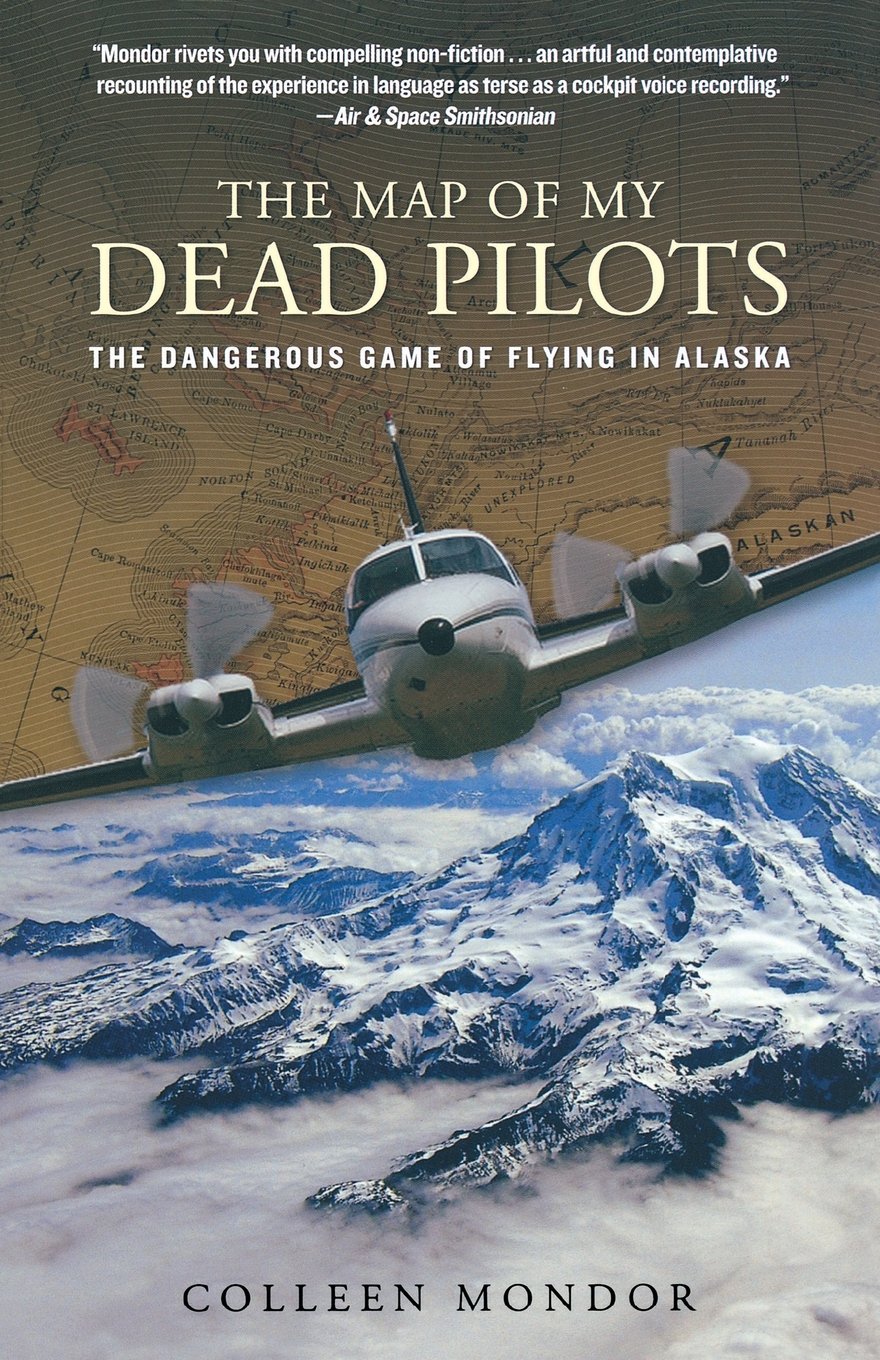 The Map of My Dead Pilots is about flying, pilots, and Alaska–and, more specifically, about those pilots who take death-defying risks in the Last Frontier and sometimes pay the price. Colleen Mondor spent four years running dispatch operations for a Fairbanks-based commuter and charter airline–and she knows all too well the gap between the romance and reality of small plane piloting in the wildest territory of the United States. From overloaded aircraft to wings covered in ice, from flying sled dogs and dead bodies, piloting in Alaska is about living hard and working harder. What Mondor witnessed day to day would make anyone’s hair stand on end.

Ultimately, it is the pilots themselves–laced with ice and whiskey, death and camaraderie, silence and engine roar–who capture her imagination. In fine detail, Mondor reveals the technical side of flying, the history of Alaskan aviation, and a world that demands a close communion with extreme physical danger and emotional toughness. The Map of My Dead Pilots is an engrossing narrative whose gritty, no-holds-barred style is reminiscent of the works of Ken Kesey and Tim O’Brien.

“The Map of My Dead Pilots is that other kind of memoir–galvanizing, exhilarating, fresh. The ridiculously daring pilots of the Alaskan frontier are here, of course–meticulously rendered, artfully arranged. But undergirding it all is Mondor’s own tremendous passion for a particular place and time, her enormous skills as a storyteller, and her brave (let’s call it sublime) commitment to writing down what cannot be forgotten. Don’t miss this book. Please don’t.”

*STARRED* *2011 BOOKLIST EDITORS’ CHOICE* For thrill-seekers, outlaws, and renegades everywhere, Alaska may be the last bastion for those in pursuit of a fly-by-the-seat-of-your-pants lifestyle. To hear Mondor tell it, it could be where the saying originated. As operations manager for a commercial airline servicing Alaska’s remote villages and hamlets, a.k.a., the bush, Mondor had a bird’s-eye-view of the rigors of flying cargo that often as not included carcasses as well as crates, sleds as well as the dogs that hauled them, and passengers who had no other means of traversing a state whose isolation was both allure and aggravation. The men who flew these missions are, and all too sadly, were, a lethal combination of danger-junkies and hotshots, dreamers and schemers, dedicated professionals and determined daredevils who reveled in the challenges that Alaska’s climate and terrain threw their way. That most of them are no longer alive may or may not be the moral of the story, but if it’s said that dead men tell no tales, then thank goodness Mondor is around to do so. Though they were her colleagues and friends, Mondor walks the tightrope between admiration and detachment with a deft and agile balance, presenting an equitable yet passionate memoir that virtually flies off the page.
— Carol Haggas, Booklist

In describing commercial flying in Alaska, instead of the story you want to hear, she rivets you with compelling non-fiction. Mondor spent four years in the 1990s as an operations dispatcher at one of the small indie airlines tethering the state’s remote towns and villages to civilization. Map provides an artful and contemplative recounting of the experience in language as terse as a cockpit voice recording….Writers are frequently advised not to quit their day jobs. Be grateful Colleen Mondor did, then wrote about it.

As you delve deeper into the book, chapters like “The Dead Body Contract,” “Dropping through a Hole in the Sky,” “The Worst Cargo in the World,” and “One Hundred Crash Stories” live up to the drama of their titles. (In case you’re wondering about the worst cargo in the world, here’s a hint: four paws and a harness.) At one point a pilot asks, “What the hell are my choices up there? You can’t see a damn thing, and mountains in all directions.” In The Map of My Dead Pilots, Mondor does a great job of giving readers a well-documented, frank, and clear idea of the harrowing nature of flying in Alaska. It’s not “Northern Exposure meets Air America” as the flap copy reads—it’s actually something much more interesting. Highly recommended.
— Jeff VanderMeer, Omnivoracious (see full review)

It’s a story of danger, of loss, of courage, of unsavory landing strips and forbidding mountains, of delivering mail and making mercy flights, of adrenaline and prayer, of unpredictably changeable winds and oncoming storms, of snow, of difficult decisions, of good fortune and bad luck, and, always, of the unbelievable cold. But it’s also about why we choose the lives we do, how we rewrite our pasts to make sense of ourselves to the person we’ve become, what we choose to remember, and how and why we forget what we do: It’s about myth-making, storytelling and memory.
— Nancy Pearl, NPR’s Morning Edition, NPR GREAT SUMMER READ (see full review)

If you are planning a trip to Alaska that includes flying into remote areas, don’t read this book. You’ll end up taking the bus. But, if you are looking for a gritty, I-can’t-believe-they-did-that, blatant example of anti-authority, invulnerability and macho hazardous attitudes, you’ll probably like this book. If you want to discourage someone from a career in aviation have them read this book. Really.
— Meg Godlewski, General Aviation News (see full review)